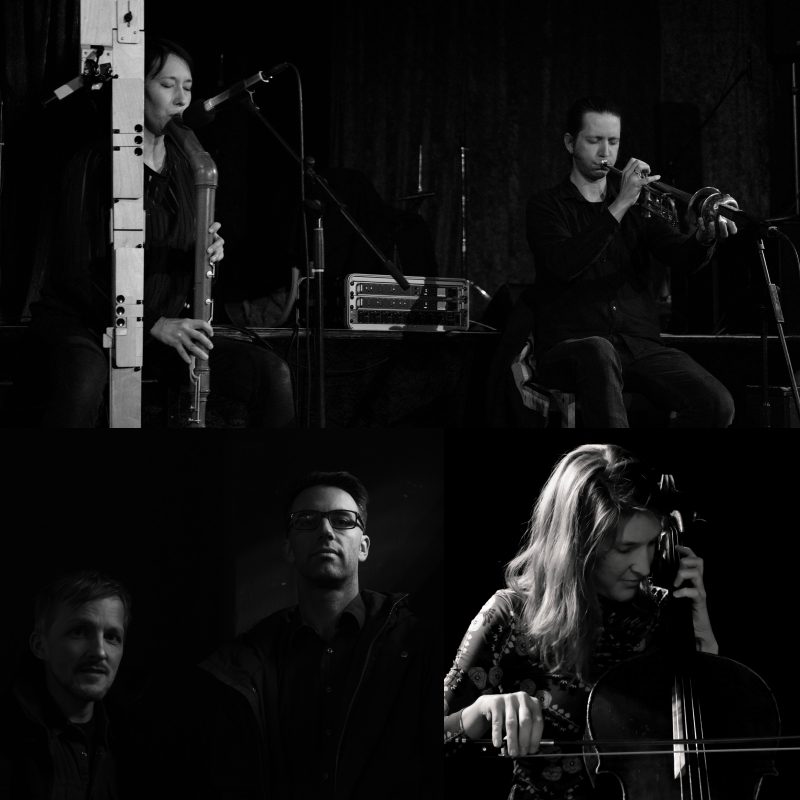 In the exploratorium, Warble (with swarm) as well as Superimpose (with WITH John Butcher / Sofia Jernberg / Nate Wooley) present their new albums, which are both released by Slovenian label Inexhaustible Editions.

Miako Klein, Berlin-based musician, performer and improviser, has a greatly varied musical background. Classically educated on the recorder and violin, she has extensive experiences in performing contemporary music, as well as in Early and improvised music. Brad Henkel is a trumpeter and composer from the United States currently based in Berlin. With a primary focus on improvisation, using a broad color palette of pitched and unpitched sounds, he creates and participates in music which is rooted in the Jazz, Contemporary Classical, and Echtzeitmusik traditions. He is a member of KIM Collective.

Superimpose is ONE sound – Matthias Müller and Christian Marien have been developing their collaborative re-search into sound since 2006 – incorporating concerts in Europe, USA, and Australia, and an intensive rehearsal process that forms the basis of a clarity, depth and connectivity in their playing. Their improvisations are the result of two independant voices, acting, fusing, diverging and shifting, and cutting their own ways whilst moving in the same direction, this symbiosis redefining boundaries and roles, and creating ONE distinctive sound. This time Superimpose has the Cologne cellist Elisabeth Coudoux as a guest.

Matthias Müller is based in Berlin since 2004, and since then he plays regularly with internationally recognised improvisers. He can be heard on more than fourty releases, including a number on his own label MaMüMusic. He is a member of the 24-piece improvising ensemble Splitter Orchester, and was also a member of the German-French Jazzensemble under the direction of Albert Mangelsdorff for many years. Christian Marien is at home across a broad range of musical environments. He combines melodic phrasing with an intelligent sense of abstraction, formal awareness with an unerring improvisatory instinct, as well as sound-expertise with deeply rooted grooves. Preparations and objects applied to his drum-set organically enhance the musical situation, providing full awareness of the total sonic picture. Marien studied music in Amsterdam and Berlin where he has resided since 2000. Elisabeth Coudoux is a German cellist at the crossroads of different musical genres: free improvisation, experimental music, new contemporary music and Jazz. Based on classical studies she graduated with a jazz degree with Frank Gratkowski and Prof. Dieter Manderscheid at Cologne Music University. Besides her own projects (like Emißatett she composes for) she is part of a lot of ensembles and plays cello in interdisciplinary projects with dancers, visual artists, poets and performers.