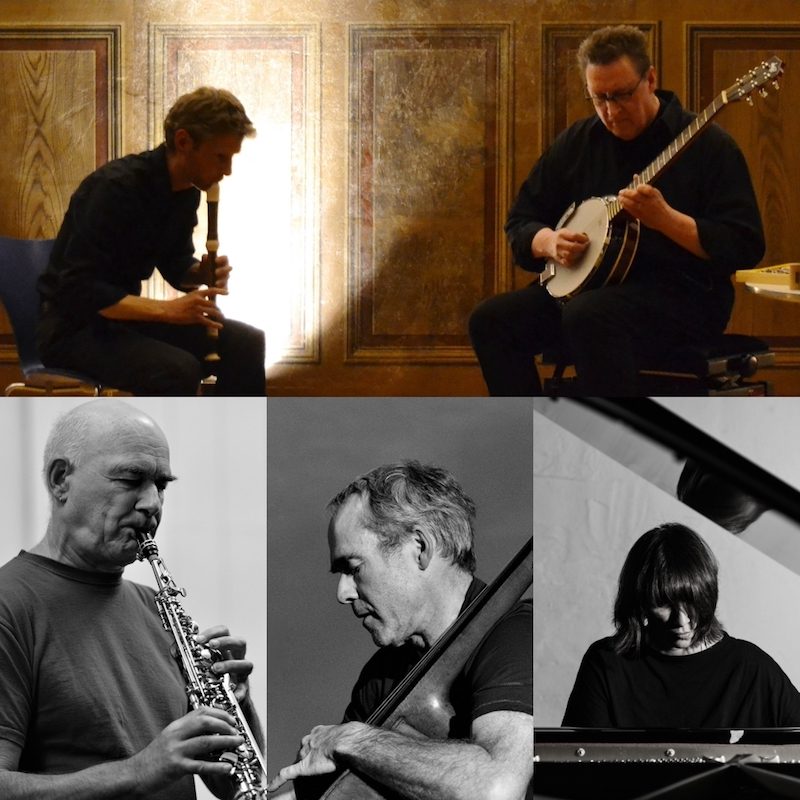 The idea and basis for the TRAMES trio is formed by various cornerstones of music history: Chamber jazz of the Jimmy Giuffre Trio, the ecstasy and drama of free jazz, traditions of new music and new forms of experimentation since the 1960s, both in the field of composed music and in experimental music. Within this coordinate system, the trio wants to find a point in the center from which there is free access to ensemble music that combines an open and complex structure and sound design with the immediacy and emotionality of improvisation. In doing so, the freedom and intensity of power, silence and vulnerability, of abstract structures and noises, but also of lyrisms to each other should not experience any delimitation.

Céline Voccia is a french pianist, composer and improviser in the Free Jazz scene in Berlin. She studied classical piano at the Geneva Conservatory and jazz music and improvisation in Paris and Berlin. Her music is a fusion of the jazz vernacular with classical piano technique, thus culminating in an abstraction of contemporary music with Free Jazz. Michel Doneda was born in France in 1954 and is a self-taught musician. Around 1980 he founded IREA (Institute for Research and Exchange between Arts of Improvisation) in France together with musicians, dancers and actors. Doneda is very involved and active in the international music scene. He has toured in Africa, Japan, Asia, the USA, Canada, South America and Russia and has already released more than 50 CDs. Alexander Frangenheim, a classically trained bassist, has worked as an improvisor since the late 1980ies. He has played with many leading musicians from around the world. From the mid-90ies to the beginning of the 2000s he was a key figure in the field of collaboration with dance. In 1992 he founded his label concepts of doing for festivals, events and as a CD label. From 1997 to 2003 concepts of doing – Interaktion Tanz Musik was a prominent platform for experimental inter-media exchange in Europe. Since 2005 he has lived in Berlin. He created studioboerne45, a most distinguished recording studio for independent artists, where he since then also continued to produce the concepts of doing festivals.

The composition Flautando 3.7 marks the beginning of the collaboration between Ivo Berg and Thomas Gerwin as a duo: Samples are obtained from radical sound experiments on the raw material of the flute, which are doubled, stretched, alienated or split into their components as an electroacoustic tape and improvisational material flow back to the players. From this explorative setting, Thomas Gerwin and Ivo Berg find an intensive chamber music-making between the poles of elementary physicality and digitization, simplicity and compositional complexity, immediacy and immersion. A historical aspect is always faded into this search for current forms of expression through the instrumentation of the recorder and the integration of “cheap electronics”. In addition to free improvisation, the starting point is also graphic notations and open improvisation concepts.

Ivo Berg studied recorder and early modal ensemble music in Bremen and Tilburg. In addition to contemporary experimental music, his focus is on the performance practice of early music. As a singer and recorder player he gives concerts with the Ensemble Nusmido, which specializes in the music of the Renaissance and the Middle Ages. In 2014 he published his dissertation on the topic of musical tension and carried out further research work among other things in the area of ​​gesture, embodiment and historical performance practice. After working at the Musikhochschule Lübeck and the Universität für Musik und darstellende Kunst Wien, he has held a professorship for music education at the Universität der Künste Berlin since 2018 and is the head of the artistic and educational training program. Thomas Gerwin, a classically trained composer and sound artist, came to electroacoustic music very early on, and since 1993 he has also been working intensively in the fields of “soundscape composition” and radiophonic art. Mainly in his Berlin atelier inter art project he composes instrumental and (live) electronic works for concerts and performances, stages experimental audio pieces and creates sound and video installations. As a means of expression for his interactive and “situational” spatial works, he often includes new media, theater, dance, film, light and sculpture. At the same time, he has been improvising since early youth or composing spontaneously with guitar, found objects, live electronics and, since 2008, with his prepared 6-string banjo, a “perfect combination of percussion and string instrument” and teaches in the exploratorium berlin – Raum für Improvisation.

Still the number of available seats is limited and a concert visit is only possible with advance booking. Please use the form below to make your booking no later than 2.00 pm on the day of the concert. You will then receive further information. You can find exploratorium’s current rules of hygiene by clicking on this link.

In addition, the concert will be broadcast as a live stream via our YouTube channel. Therefore the start will be on time!
https://www.youtube.com/exploratoriumberlin