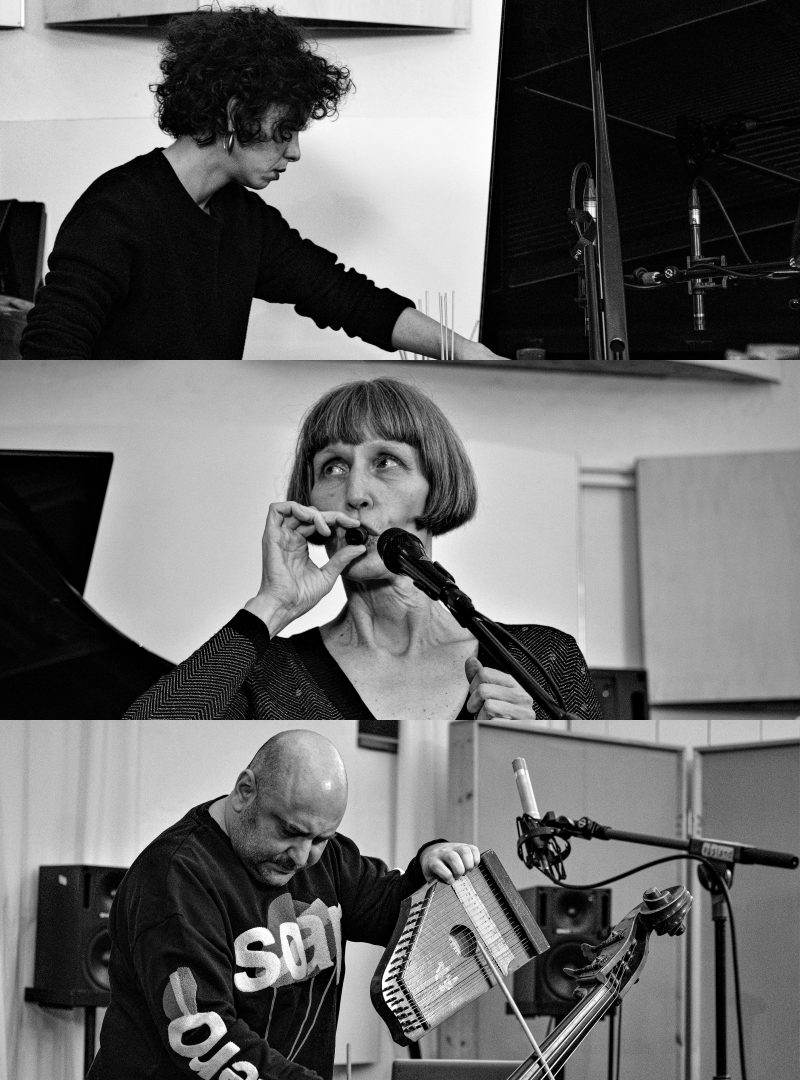 Magda Mayas, Ute Wassermann and Raed Yassin have been working together on various projects for many years. Their common trio has existed since 2020.

Over the past 20 years Magda Mayas developed a vocabulary utilizing both the inside as well as the exterior parts of the piano, using amplification, preparations and objects that become extensions of the instrument itself. Mayas explores textural, linear sound collage, and has developed a set of techniques that draw on the history of prepared and inside piano vocabulary, but are highly individualized and expand the language for internal piano music making. Alongside the piano, Mayas performs on a Clavinet/Pianet, an electric piano from the 60s with strings and metal chimes, where she engages with noise and more visceral sound material, equally extending the instrumental sound palette using extended techniques and devices. She holds a PhD in Fine Arts from the University of Gothenburg, Sweden. Since 2019, she is the program coordinator and teaches improvisation at Luzern University of applied Sciences and Arts.

Ute Wassermann has studied visual arts (sound installation, performance art) at the Academy of Fine Arts in Hamburg, and singing at the University of California, San Diego. She tours the world as an improviser, she realizes audiovisual voice performances / installations and compositions for soloists and ensembles. At the core of her research is an ongoing and uncompromised exploration of her voice. Ute Wassermann´s otherworldly singing transcends the human voice. She sings multidimensional sculptural sounds oscillating between electronic, animalistic, inorganic and human qualities. Sound environments are an important source for her imagination. Ute creates imaginary acoustic habitats in which her chameleon like voice is tuning in with composed or found soundscapes. Her methods to extend and alienate the voice include the use of bird whistles, lo-fi electronics, resonators, field recordings and different types of microphones. Her performances engage with everyday objects or self invented instruments for voice which can take shape as acoustic costumes.

Raed Yassin is an artist and musician. He graduated from the theater department at the Institute of Fine Arts in Beirut in 2003, and since then has developed his conceptual practice through multiple mediums such as video, sound, photography, text, sculpture and performance. As a musician, Raed Yassin has been a key member in the Lebanese underground music scene for many years. One of the organizers of the Irtijal Festival of Experimental Music from its early beginnings, he founded his concept music label Annihaya in 2009. He is a member of several bands and groups, including “A” Trio and PRAED among others. As a double bassist, he developed a personal and independent extended technique, by employing different preparations and objects on his instrument. His interest here relies heavily on textures, energies and vibrations, the density of volume and sound, rather than conventional melodic structures. Also an electronic musician and experimental turntablist, his approach to vinyl ranges from deconstructing Arab pop music, to reexamining the traditional music archives of countries from the global south. With his duo band PRAED (along with Paed Conca), he acts as the lead singer and synth player, merging free jazz with psychedelic rock and Egyptian Shaabi music. Raed currently lives between Berlin and Beirut.

The concert will also be livestreamed via our YouTube channel:
https://www.youtube.com/exploratoriumberlin

On Saturday, 8 January, Magda Mayas will give a special workshop “Ways to your own sound”.

The 2G Plus rule applies to this concert: only vaccinated and recovered persons are admitted (please show proof!). In addition, masks are compulsory (also at your seat) and we ask you to keep 1.5 m distance to each other. An additional test is recommended, but not obligatory.

All corona regulations relevant for the exploratorium are summarised here: https://exploratorium-berlin.de/corona-regeln/