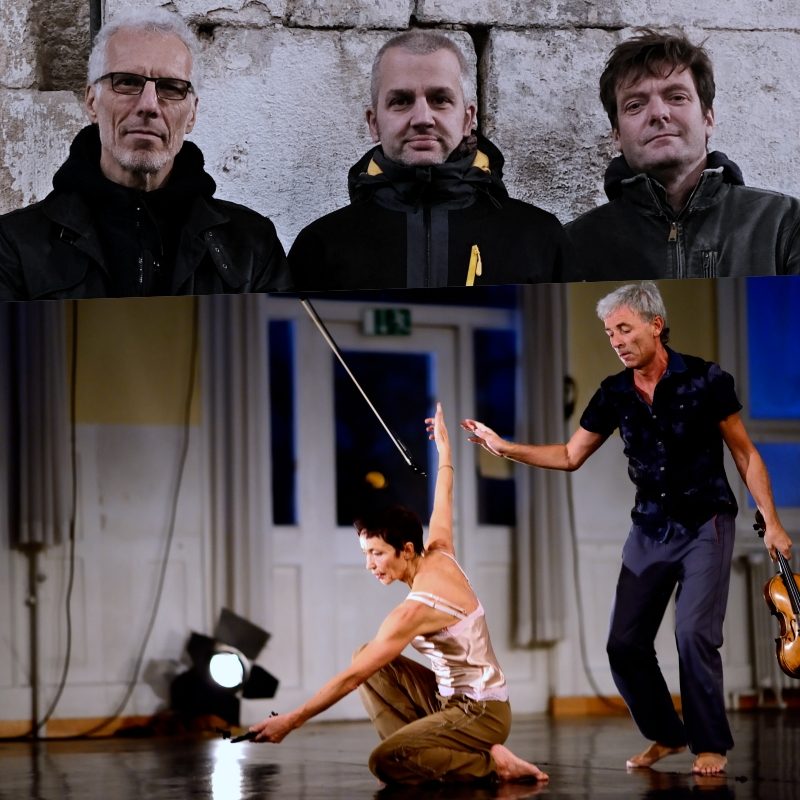 *Joel Grip replaces Achim Tang, who is unable to attend.

The risk: a leap into the unknown. Nothing is planned, nothing is arranged. All that matters is the moment of meeting. The actors act unprotected. Here risk is desired, confrontation and yet always: closeness. Lilo Stahl and Harald Kimmig find a common language and specific forms of communication. Through the jointly found meta language, which always happens from the moment, both artists are able to initiate, further develop and end a process at any point in time. The performance points beyond the individual statements of those involved. Dance and music combine to create a new form.

Lilo Stahl stands for dance and instant composition. Since 1981 she has been working as a freelance lecturer and on stage. She is one of the most important co-creators of new dance developments and was significantly involved in establishing improvisation as a stage form. She is co-founder of bewegungs-art Freiburg (1979) and has been part of the management team of the TIP full-time training in dance, improvisation and performance since 2006. From 1987-91 she was a member of Anzu Furukawa’s company Dance Butter Tokyo. Her last solo work is what if on the topic of “Silence & Noise”, funded by DIS-TANZEN-SOLO and can be seen at the soundance festival in Berlin in 2021. Harald Kimmig is an improvising musician, performer and composer. His work is about the exploration of sounds and forms by means of improvisation and their interdisciplinary interactions with other arts. He plays improvised music in his ensembles. In a virtuoso way he combines the noises generated on the instrument with conventional violin playing. Over the years he developed an unmistakable sound and style. He plays among others in the string trio Kimmig-Studer-Zimmerlin and is the founder of the performance group The Human Factory; one of his last solo works was HARA in Berlin, 2021.

The WISSELTANGCAMATTA move on the cutting edge of freely improvised music, soundscapes and free jazz. Their improvisations are unpredictable and agile, ignite spontaneously and move wildly – and then run their course through minimalist musical collages. Georg Wissel, Achim Tang and Simon Camatta are all three masters of freely improvised music and driving forces in the further development of forms of improvisation. Through their long-term trio relationship, they have created a framework in which they continuously work on their own type of free improvisation. In the meantime, the three musicians have achieved a dreamlike understanding of their interaction. Changes in dynamics, density, tempos, melodic phrases, noise or energetic layers, surprise with natural ease.

Georg Wissel refers to himself also as Sculptor of compressed air. He made his first important experiences in improvised music recording and touring in the late 80ies in Germany, France and Southamerica as guest musician of Pöhlmusik along with Australian violist Jon Rose. Inspired by collaborations with electronic musicians, he also began (beside working on instrumental playing techniques) searching for new sounds by preparations, which by the time has become an integral part of his playing. Achim Tang made his early musical experiences playing recorder, trumpet, guitar, bass guitar and double bass since 1984. He collaborated with numerous musicians from various aesthetic backgrounds, and he was invited to many international festivals. In 2011 he was the 4th Improviser In Residence of the Moers Festival. Simon Camatta got his first drumkit as a christmas present at the age of 11. For twenty years he is now playing music of various styles and in many constellations around half of the world.

As Achim Tang is prevented from attending at short notice, he is replaced by Joel Grip.