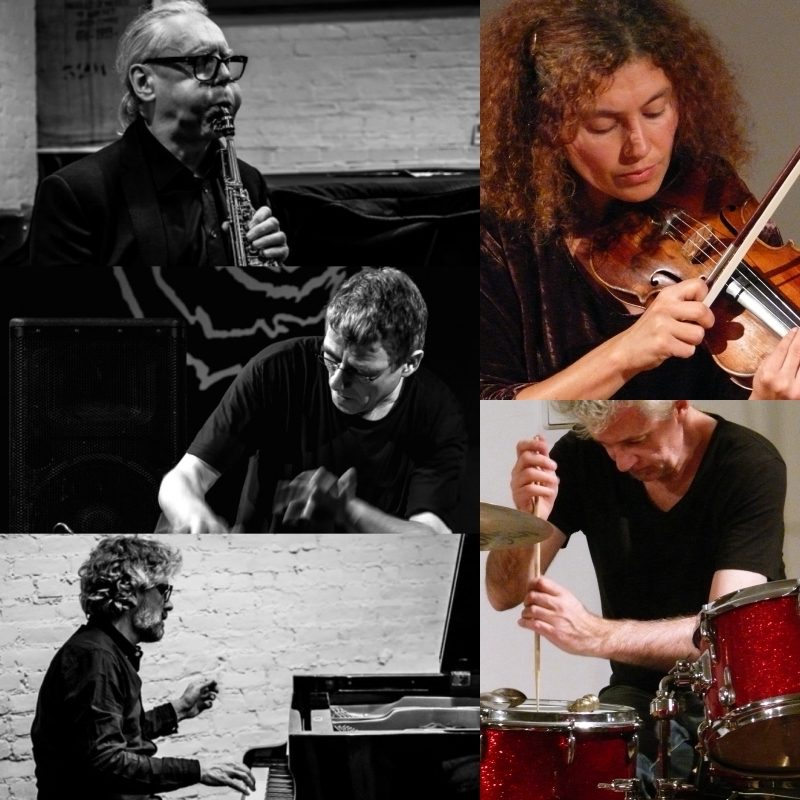 The Trio LDL: Leimgruber_Demierre_Lehn is an ensemble of musicians who perform sound improvisation paying attention in a very detailed manner to the room where sounds are produced. The music improvised by these musicians in a given space carries the mark of this space, that it is based in some sense on its soundprint, on its form, whether it uses or reveals its acoustic potentialities. For the concert on May 12th the violinist Biliana Voutchkova and the drummer Tony Buck are joining as guests.

Urs Leimgruber, saxophone, is a key member of the European scene of contemporary improvised music. He specializes in solo concerts and performs regularly with the Trio Leimgruber-Demierre-Phillips and with Quartet Noir (with Marilyn Crispell, Joëlle Léandre, Fritz Hauser) in Europe, Canada, USA, Japan, and Cuba. His countless collaborations have resulted in concerts and recordings with Fred Frith, Steve Lacy, Lauren Newton, Evan Parker, Keith Rowe, Günter Christmann, Sunny Murray, Thomas Lehn, Günter Müller, John Butcher, Axel Dörner, Günter Christmann and many others. He also has been engaged for New Music projects with the Berlin Philharmonic Wind Quintet and the ARTE Saxophone Quartet. During the 1970s, he was the co-founder of the Electric jazz and free-music group OM.
https://en.wikipedia.org/wiki/Urs_Leimgruber

Thomas Lehn, analogue synthesizer, developed as an interpreting and improvising pianist individual forms of expression in the field of live-electronic music. Since 1989 he concentrats himself on using analouge systems, which allows him by a direct acces to the single elements of the electronic sound synthesis to react immediatlely to the structure and to form the process of live music. As a synthesizer player he has performed at festivals and during tours in Europa, USA, Canada, Japan, Australia and Newseeland in duos with Gerry Hemingway, Paul Lovens, Eugene Chadbourne, Marcus Schmickler and Frédéric Blondy, in Trios with KONK PACK (Roger Turner & Tim Hodgkinson), FUTCH (Jon Rose & Johannes Bauer), TOOT (Phil Minton & Axel Dörner), THERMAL (John Butcher & Andy ‘Ex’ Moor), and large ensembles like E-RAX, CORTET, MIMEO.
http://www.thomaslehn.com

Biliana Voutchkova is a dynamic and thoroughly engaged interdisciplinary artist, violinist, composer, improviser and curator with truly personal, unconventional artistic language. Through the prism of listening, her early training in classical music and the many years of development as contemporary artist-performer, she explores states of spontaneity and intuitive resonance embodied in her multifaceted activities. Her constant creative research and work spans the widest possible range of sound, vision, movement and includes long durational / multidisciplinary performances, concerts, audiovisual works, compositions and installations with focus on the sound space. Based between Berlin and her rural residency on the black sea coast of Bulgaria, Biliana works internationally as a soloist, in group and collaborative settings and with renowned ensembles such as the Splitter Orchestra, United Berlin, Solistenensemble Kaleidoskop, Zeitkratzer, Ensemble Modern, and her co-founded groups Jane in Ether and Voutchkova/Thieke duo. Biliana is a risk taker approaching contemporary classical repertoire with the same inspiration and freedom characteristic of  her forceful improvisations. She has been heard at festivals and concert series worldwide.
http://www.bilianavoutchkova.net

Tony Buck is regarded as one of Australia’s most creative and adventurous exports, with vast experience across the globe. As a drummer, percussionist, improviser, guitarist, video maker and producer, he has been involved in a highly diverse array of projects but is probably best known around the world as a member of the trio The Necks. Apart from The Necks he has played, toured or recorded with Jon Rose, Otomo Yoshihide, John Zorn, Tom Cora, Phil Minton, Keiji Haino, Evan Parker, The Machine for Making Sense, Lee Ranaldo, Ne Zhdall, The EX, Clifford Jordan, Ground Zero and many others. Following studies and early experiences in Australia, he spent time in Japan, where he formed Peril with Otomo Yoshihide and Kato Hideki before relocating to Europe in the mid-nineties. Current projects include a LIVE solo adaption of the UNEARTH music, incorporating installations, video, drums and guitar; Spill with Magda Mayas; Transmit (a guitar driven post-rock project); New York based trio Glacial (with David Watson and Lee Ranaldo); Circadia (with Kim Myhr, David Stackenas and Joe Williamson); a long standing duo with Axel Dörner as well as a continuing in ad hoc and improvised performance settings.
http://tony-buck.com