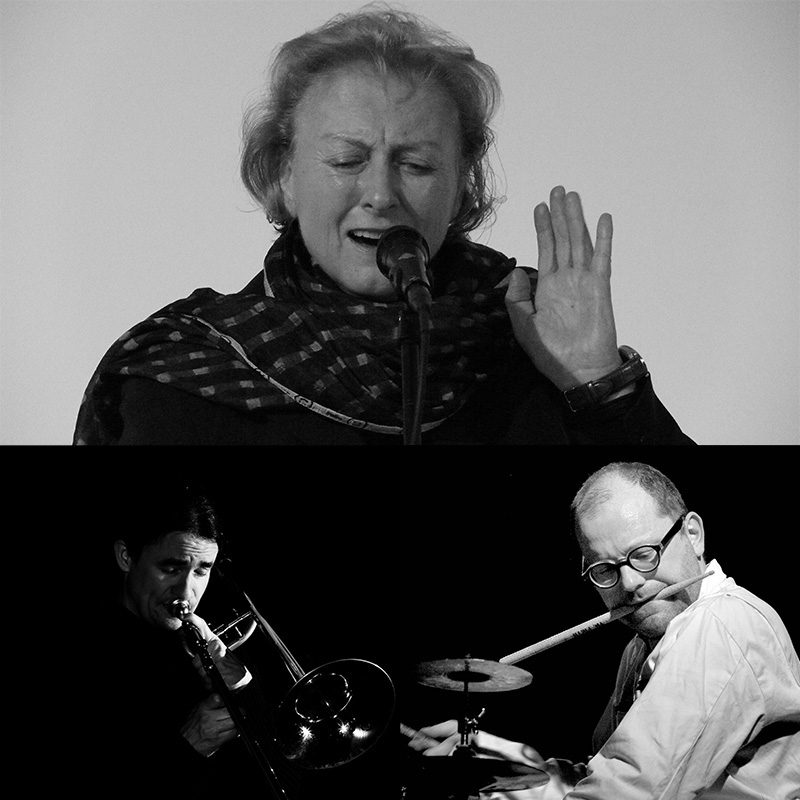 Parole is since 1984 title of the sound poetry programs of Elke Schipper, which are performed as work-in-progress. Over the course of time, more and more new texts and pieces have been added, and there were different constellations with musicians. After almost every performance, texts and pieces are reworked, so that there are big differences between a version from 1990 and the one from 2019 under the same title.

The title of the program refers to Ferdinand de Saussure’s term parole for spoken language. The spoken word releases the sound of the language, making it an open, dynamic process that always accompanies the transference of meaning with acoustic events. Her sound poetry is dedicated to this sensual texture of language. She enters the field of tension between the reality of the word and the reality communicated by it. These realities are decomposed, split, rasterized, assembled, collaged and transformed, bringing to the surface hidden linguistic consistency and energy that often calls for cross-border articulations. Schipper is concerned with all these vital qualities of language. This is where language and music come together – both unfold their drama as a related temporal progression in tempi, rhythms, meter, sound, tone, melody and can find common archaic understanding on these common parameters. A word can become semantically meaningless, but musically meaningful. Elke Schipper has been working as a freelance author on visual arts, contemporary music and an aesthetic theory of artistic improvisation since 1976. She was/is the curator of numerous exhibitions, concerts and festivals, and since 1974 she has performed her own sound poetry, with which she is represented in international anthologies. Since 1986 she has been exhibiting her visual poetry under the title contrescript. As a vocalist she has been present in various formations for a good ten years and is documented with this work on CDs.

Already as a teenager, Michael Griener dealt with the traditional playing styles of jazz and free improvisation as a teenager. He learned his instrument self-taught. Instances of his learning were his own search for music and his listening. His proximity to jazz allows him to be present above all in constellations that continue to live this idiom. The precision developed in the process, combined with an unexcited but alert playing style, characterizes his musical personality and makes him a welcome partner in free improvisation formations as well as in interdisciplinary projects. In interaction with sound poetry, percussion and speech rhythms, melos of speech and drummed scales find a common terrain, expanded by sounds that correspond to the pre-linguistic material of the voice, but do not imitate it. Michael Griener works/worked with a large number of musicians, continuously e.g. with Rudi Mahall, Jan Roder, Günter Christmann, Axel Dörner, Alexander von Schlippenbach. He gives concerts worldwide and is documented on numerous CDs. He teaches at the Carl Maria von Weber Music Academy (Dresden) and the Berlin Jazz School.

The musical understanding between trombone and language draws from a common design reservoir through the thematization of breathing and the use of vocal material. Breath modulation on the mouthpiece, multiphonic sounds with voice oscillations and linguistic gestural phrasing were developed as an opening of the instrumental sound for direct, physically supported communication in free improvisation and have also become the material for compositions. After classical training, Patrick Crossland first played in various orchestras before dedicating himself primarily to works of contemporary music. He worked i.a. together with Vinko Globokar and Marco Stroppa, is a.o. Member of the ensembles laboratorium and zinc & copper works and performs his own multimedia and electronic solo performances. In recent years, free improvisation has increasingly become part of his musical life and he also works with numerous musicians, e.g. with Jack Wright, Alexander Frangenheim, Günter Christmann. Patrick Crossland is a lecturer at the University of Maryland in Baltimore/USA.